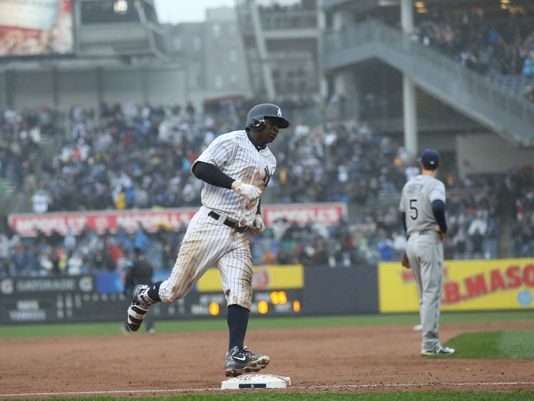 The home opener is one of the most exciting days in the MLB season, but Yankees fans had to wait a little longer than normal to see their team take the field. The game was originally scheduled for Monday, April 2, but it had to be rescheduled for the next day after a snow storm hit the New York area. All of the fans that braved the cold on Tuesday got to see their team get a blowout win over the Tampa Bay Rays.

Tuesday’s game was tied 1-1 when the Yankees broke out for three runs in the bottom of the third inning. Didi Gregorius drove in all three runs with a home run off of Chris Archer. After getting shut down by Jordan Montgomery for five innings, the Tampa Bay offense came alive after the New York starter left the game. A RBI single by Adeiny Hechavarria and a two-run double by Denard Span helped the Rays tie the game. All three runs were scored against Jonathan Holder.

New York did not get discouraged after surrendering their large lead. The team responded with a long rally in the seventh inning that saw them score four runs. A Brett Gardner sacrifice bunt early in the inning was botched by third baseman Matt Duffy. His throwing error allowed Tyler Austin to score from first base. Didi Gregorius then hit his second three-run home run of the game to give New York a four-run lead.

The Yankees added three more runs in the eighth inning. Aaron Judge got his first RBI of the season with a bases loaded walk. Gregorius continued his amazing performance with a two-run single. The late offense explosion gave the Yankees a 11-4 win over their division rivals.

While they easily won the game, everything did go as planned for the Yankees in their first home game. Giancarlo Stanton struck out five times for the first time in his career. The poor performance resulted in him being booed by the New York fans. It is only a matter of time before the reigning National League MVP launches a home run in the seats at Yankees Stadium, but that is certainly not the debut he envisioned.

The Yankees have now won three of their first five games. They will return to action on Wednesday, April 4, to complete their short two-game series against the Tampa Bay Rays. The starting pitchers will be Luis Severino and Blake Snell.