Home MLB Yankees Yankees are On a Home Run Stretch 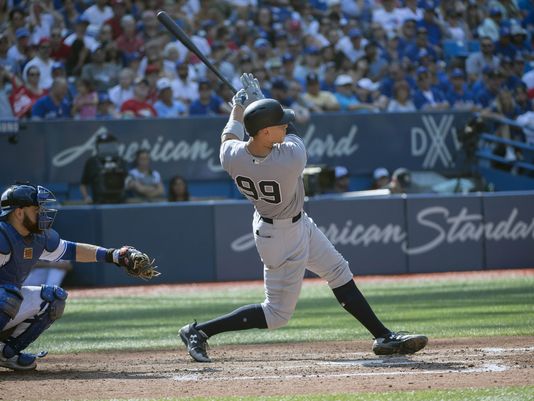 The New York Yankees took the lead in the American League East over the Red Sox on Monday. The Yankees took the half-game lead over Boston by using the power of their bats even though their pitching wasn’t at its best.

Yankees’ starting pitcher Masahiro Tanaka wasn’t having his best night. He was walking batters, and the Ranger’s lineup was swinging well against his pitches. After the game, Tanaka would admit that his split-fingered fastball just wasn’t moving for him. Tanaka gave up four runs in the first five innings, but the Yankees didn’t need his best pitching to pull out the victory.

The batters for the Yankees knocked five home runs out of the park on Monday night, and that gave them the 10 to 5 victory over the Rangers on the Rangers’ home field. The home run derby got underway when Gleyber Torres hit a homer off of Rangers’ starting pitcher Colon in the second inning. Torres would go on to hit another homer in the sixth.

Neil Walker got off the mark with his first home run of the season. Aaron Judge knocked his twelfth ball out of the park on the year, and Aaron Hicks added to the Yankees’ margin of victory when he cleared the bases in the ninth.

This five home run outing for the Yankees set a record for the club. It was the first time in Yankees’ history that the team hit for four or more homers in three games in a row. It was also a special day for Torres as he became the second youngest player in Yankees’ history to hit at least two home runs in a single game. The youngest player to do so was the legendary Mickey Mantle.

With this important victory, the Yankees record stands at 31 wins and 13 defeats. The team currently has the best record in the majors.