Home NFL Giants Who Will Replace Eli Manning for the New York Giants? 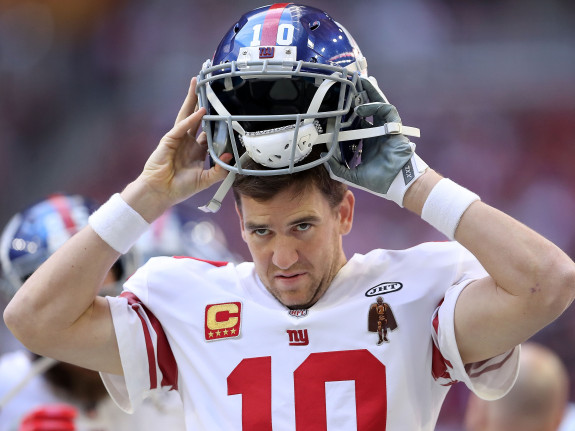 Eli Manning has had one of the best careers of any active quarterback in the NFL. Although he has won two championships, he is declining as a quarterback. The New York Giants struggled in various ways last season. Instead of drafting a quarterback to replace Manning, the management of the team decided to draft a running back. Some fans thought that passing on Sam Darnold was a mistake.

The head coach of the New York Giants is confident in Manning’s ability for the 2018 season. The general manager felt like the Giants had too many holes to address the quarterback position this year. Although Manning’s passing ability is declining, he still understands the current offensive system. Davis Webb is the backup quarterback for the team. Although he received some game action last year, few people think he is the answer for the future.

Instead of drafting a quarterback next year, the Giants could sign a free agent quarterback. Some quality free agent options may be available. Blake Bortles is in the final year of his contract with the Jaguars. If the Jaguars let him go, the Giants would be an excellent place for him to play. His passing style aligns with the overall strategy that the Giants utilize on offense.

If no free agent options are available, most NFL experts expect the Giants to draft a quarterback with the team’s first pick. Many people expect Manning to retire within the next few seasons. As a result, it is critical for the team to find a replacement.

Although the Giants had a terrible season in 2017, fans are optimistic that the team can be competitive this year. Manning is excited about the upcoming season. The Giants need to do a better job protecting him against opposing defenses.