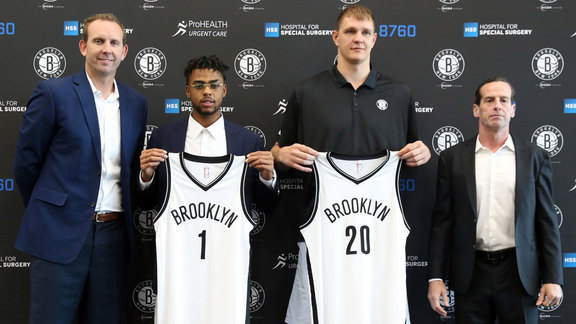 Brooklyn’s biggest off-season move involved trading C Brook Lopez and the 27th pick in the first round to the Lakers for PG D’Angelo Russell and C Timofey Mozgov. The Nets then selected C-F Jarrett Allen of Texas (22nd overall), and Bulgarian PF Aleksandar Vezenkov with the 57th overall pick. Vezenkov however, plans to play for Barcelona, Spain in 2017-18. Additionally, the Nets acquired a pair of veterans via trades, F DeMarre Carroll from Toronto (for Justin Hamilton) and SG Allen Crabbe from Portland (for Andrew Nicholson).

The absence of Brook Lopez creates a huge void in the paint. Mozgov would appear to be the logical replacement, but his career stats over seven seasons (7.0 ppg 5.0 rpg, less than 1 blocked shot per game) pale next to Lopez’s 2016-17 numbers (20.5 5.4 1.7). Rookie Jarrett Allen shows loads of potential, but he’s just 19 years old. The rest of Brooklyn’s frontcourt (veterans Carroll and Trevor Booker, complementary parts Quincy Acy, Rondae Hollis-Jefferson, Joe Harris) are serviceable at best.

On the other hand, Brooklyn is overloaded along the perimeter and backcourt, with a roster including Jeremy Lin, Russell, Crabbe, Spencer Dinwiddie, Caris LeVert, Sean Kilpatrick and Isaiah Whitehead. The interchangeable Lin and Russell are expected to share playmaking duties, while Allen Crabbe may be poised for a breakout season if he gets enough minutes. LeVert could also make a big leap, but playing time will be difficult to come by in this already-crowded unit. In LeVert’s favor could be his defensive skills, which, given the lack of a consistent shot-blocker, will be critical to any success the Nets have in 2017-18.

Second-year head coach Kenny Atkinson did about as good a job as could have been expected in his first year, especially given Brooklyn’s below-average level of talent. Atkinson has good rapport with his players, which benefits the team’s all-important chemistry. With the Nets’ front-office apparently 100% committed to building a consistent winner through player development (via the draft, selective free agency) rather than taking the ‘quick fix’ route, Atkinson probably has at least one more full season to make his team competitive.

Brooklyn has a loyal and supportive fan base, and while the 2017-18 season’s W-L record might be similar to 2016-17’s, as long as their effort on the floor is consistently positive, and overall improvement is evident, they’ll be satisfied. Overall though, the Nets’ return to relevance remains a few years away.