The Brooklyn Nets‘ new HSS Training Center is nothing less than spectacular. Who wouldn’t want to train in front of a view like this?

Due to the current road trip, the Nets haven’t had the chance to utilize this new state of the art facility. But be assure, once the team is back home, the players are going to love having to travel to Sunset Park rather than New Jersey to get a quick practice in.

Although this season has been one Brooklyn fans want to forget quickly, the Nets have been trying to better their future one step at a time. They went out and improved at the General Manager position by hiring Sean Marks out of San Antonio and now they finalized their move to Brooklyn with the HSS Training Center. Not to mention, their young talent is finally showing promise on the court. 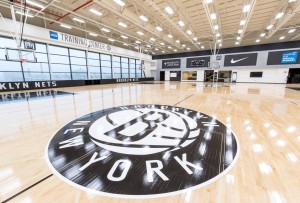 Mikhail hasn’t always been perfect since he took over as Owner of the Nets. One thing is certain though, he’s all-in for the players and certainly all-in for Brooklyn. He did say that he’d bring a championship to Brooklyn by now, but something tells me that the Nets’ faithful wouldn’t be too upset if it took another 5 years to bring that plan to life.