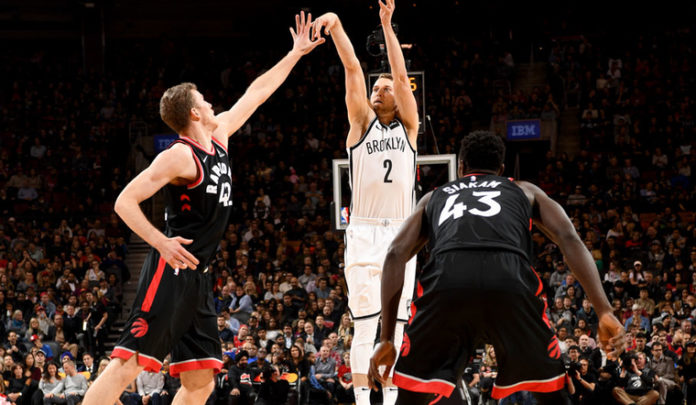 Now in their sixth season in Brooklyn, the Nets, although struggling to maintain consistency in the NBA’s Atlantic Division, continue to be committed to following the blueprint established by division rivals Boston and Toronto, allowing young players to (hopefully) develop together, mixing in reliable veterans, and trying to grow a more positive, winning mindset throughout the organization.

With the league’s worst W-L mark (20-62) in 2016-17, the Nets not only missed the playoffs for the second consecutive season, they couldn’t help themselves significantly in the draft due to a 2013-14 trade with the Celtics that cost Brooklyn four future first-round draft picks in exchange for a quartet of players (Garnett, Pierce, Terry, White) of whom only one (Terry – Milwaukee) currently remains on an NBA roster. Two of the first-round picks surrendered by the Nets turned out to be rising star Jaylen Brown (2016 – Boston) and 2017 #1 overall pick Markelle Fultz (Philadelphia).

There is undeniable talent on the current Net roster, including highly-touted prospects PG D’Angelo Russell, recently acquired C Jahlil Okafor, better-than-expected contributors SG Allen Crabbe, SFs Rondae Hollis-Jefferson and Caris LeVert, projects such as rookie C Jarrett Allen, and veteran ‘glue’ guys F DeMarre Carroll and injured PG Jeremy Lin. Lin’s season-ending ruptured patella tendon in October robbed the team of a proven floor general/leader, while putting pressure on Russell to develop similar qualities sooner than expected. Unfortunately, less than a month later Russell injured his knee, necessitating surgery that’s sidelined him for an indefinite period, leaving Spencer Dinwiddie and Isaiah Whitehead as primary playmakers/ball handlers. It’s hoped that a change of scenery will prove to be just what big man Okafor needs to rekindle the tremendous potential that led to his being the third-overall pick in the 2015 NBA Draft. Nik Stauskas was also picked up in the Okafor deal, which cost Brooklyn veteran F Trevor Booker and a 2019 second-round draft pick. Stauskas’ deadly outside shooting ability will be a welcome addition in an area where the Nets have struggled.

Until Russell can return, Brooklyn’s key players appear to be Crabbe and Hollis-Jefferson. Although both have shown to be above-average NBAers, neither of them is forcing opposing coaches to game-plan a defensive strategy for them. A best case scenario would be for Okafor to begin approaching his considerable promise. However, head coach Kenny Atkinson’s offense is of the fast break, up-and-down style, highly reliant on speed and athleticism, and Okafor is an NBA rarity; a true back-to-the-basket big man who’s more comfortable (and efficient) operating in a more structured offense. How the Nets respond to making the necessary adjustments holds the key to their fortunes in 2017-18.