The New York Rangers entered the 2017-18 season hoping to make the playoffs for the eighth straight year, but their plans have now completely changed. Injuries, poor play and a lack of salary cap space forced the Rangers to trade several of their top players before the trade deadline. Rick Nash, J.T Miller, Ryan McDonagh, Michael Grabner and Nick Holden were all shipped off in hopes of rebuilding for the future. The organization may have thrown in the towel this season, but that will not stop the team from playing hard every night. The Rangers played their first game since the trade deadline against the Vancouver Canucks on Wednesday, February 28.

The Rangers were ready as soon as the puck dropped in the Rogers Arena. They scored three goals on their first five shots. This excellent start forced the Canucks to pull Jacob Markstrom from the game. Switching goalies helped Vancouver get back into the game. Brock Boeser and Bo Horvat scored in the final six minutes of the first period to shrink New York’s lead down to only one goal.

The second period was fairly uninteresting until Daniel Sedin tied the game after 11 minutes of play. The Rangers had a hard time getting shots on the net, but they took advantage of one of the few scoring chances when Vladislav Namestnikov scored in his first game with the team. New York took a one-goal lead into the second intermission despite getting outshot 35-17 in the first two periods.

Vancouver continued to dominate possession of the puck in the third period. They eventually tied the game with a goal from Nikolay Goldobin with less than eight minutes left in the game. The Rangers quickly responded with a goal from Mika Zibanejad two minutes later. Henrik Lundvist face an onslaught of shots in the final minutes of the third period. While he did a great job of keeping his team in the game all night, Vancouver tied the game in the final minute with another goal from Brock Boeser.

The Canucks had all of the moment entering overtime, but the Rangers did not want to leave Vancouver without getting the win. New York won this tough game 6-5 after scoring on their first shot of overtime. John Gilmour recorded the game-winning goal. The team will continue its Canadian road trip when they play the Calgary Flames on Friday, March 2. 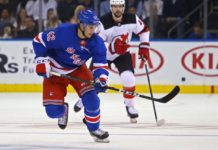 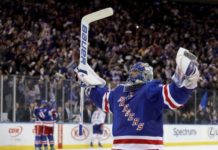