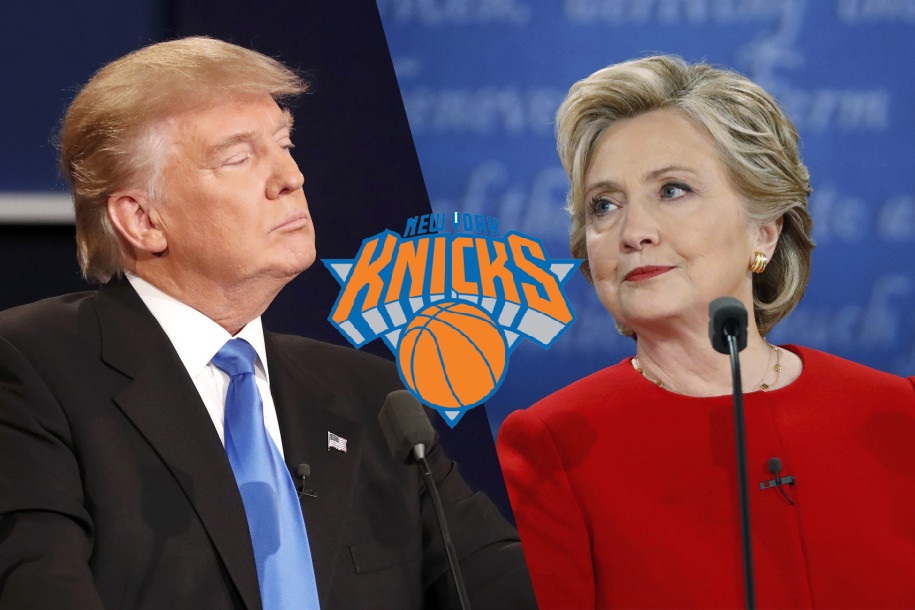 As this ridiculous Presidential Election rolls along, I’ve noticed something that needs to be addressed. The two candidates aren’t being asked the questions we really want to hear answers to. And by “we,” I mean fans of the New York Knicks. I decided to project what it would be like if one of us could ask Hillary and Donald questions at a debate so without further ado, enjoy:

THIS ARTICLE IS OBVIOUSLY INTENDED FOR COMEDIC PURPOSES AND DOES NOT REFLECT MY OPINION, THE OPINION OF SKYSCRAPER SPORTS OR EITHER CANDIDATE’S OPINION ON ANYTHING. IT IS A SATIRICAL PIECE.

Moderator: Welcome everyone to the third and final debate between Democratic nominee Hillary Clinton and Republican nominee Donald Trump at the Theater at Madison Square Garden. We’ll ask questions that Knicks fans around the world are interested in hearing the answer to and will give each candidate a chance to respond.

First question is to both Mrs. Clinton and Mr. Trump, the New York Knicks had a respectable offseason, but whiffed on another top free agent in Kevin Durant, unable to even secure a meeting with him on Long Island. How will each of you make sure New York returns to the place it once was as a prime destination in free agency?

Hillary Clinton: It’s great to be here. I believe it starts from the bottom up. We need to make sure authentic fans fill Madison Square Garden instead of tourists who come to check out the stadium. When opposing players play at The World’s Most Famous Arena and hear 19,812 Spike Lee’s screaming at the top of their lungs, they’ll want to play here for 41 games a season. I can tell you that for sure.

Donald Trump: I have to start by saying this is a good looking crowd, you all look absolutely fantastic. Knicks fans are the best looking fans in the world, they really are. Believe me when I say this, it’s not the fans who are the problem. The real problem is that these superstars aren’t paying the price when they take their talents to other places. We need to stop showing their commercials, stop putting up their billboards and stop cheering for them in New York City if they decide not to put on that blue and orange jersey, then they’ll crawl back here and beg to be a part of this city and organization.

Moderator: Mrs. Clinton, you have been able to overcome various health issues so far in this election process, how can you make sure players like Derrick Rose and Joakim Noah stay healthy for the majority of the year?

HC: I can personally guarantee every player on the New York Knicks will play at least 70 games. My doctors can cure pneumonia in a few hours, stop alien pellets from exiting my mouth and so much more I’m legally not allowed to talk about. In fact, if I’m elected President of the United States of America, I’ll make sure Derrick Rose never needs ice packs on his knees ever again.

Moderator: Mr. Trump, the Knicks have signed and drafted several international players over the past few years including Kristaps Porzingis, Willy Hernangomez & Mindaugas Kuzminskas. Do you think it’s fair to Americans growing up hoping to be in the NBA that these immigrants are taking their jobs?

DT: As long as they’re legally allowed to be in the United States, I don’t have a problem with it. I have to tell you, I love, love, love Kristaps Porzingis. How great is that guy? From boo’d on draft night to one of the top selling jerseys in the league, it’s been remarkable. On the other hand, I have been told from numerous credible sources that the Mindaugas kid has a fake birth certificate so I want him to release his real birth certificate before he gets any minutes on the floor.

Moderator: Mrs. Clinton, Adam Silver confirmed that you deleted emails in the summer of 2014 containing top secret messages between Steve Kerr and Phil Jackson. He’s now coaching the Golden State Warriors and has a championship ring as well as the best regular season record in NBA history. How do you regain these fans’ trust?

HC: There are 2 things I’d like Knicks fans to know. First, I used my personal email account when I was Vice President of the NBA, which was allowed, because it was more convenient for me. I wasn’t sure how to add another email to my new iPhone, technology is just crazy these days. Not once did I believe anyone was able to see my email address, “HEATFAN4LYFE@aol.com.” Looking back, it would have been better if I didn’t use my “HEATFAN4LYFE@aol.com” email but at the time it did not seem like an issue.

Second, there was no agreement between Mr. Kerr and Mr. Jackson regarding the head coaching position. They were only planning meetings as they talked regularly about “Mr. Dolan’s approval.” These emails would not have changed Kerr’s min-

DT: Crooked Hillary, you single-handedly made these people go through a year and a half of hell with Derek Fisher because you couldn’t work technology. Then, they had to deal with Kurt Rambis for half a season and stress out over the potential of him being hired as the head coach permanently. Let’s tell it how it is.

HC: Sure, Donald, let us tell it how it is. Can you then tell us why you claim to have had season tickets at The Garden since 1985 but have never showed any actual proof?

DT: I’ll release my season ticket receipts when you release the emails you deleted from Steve Kerr accepting the Knicks head coaching job in 2014.

Moderator: Okay, that’ll do it for that topic. Four years ago, the Nets franchise moved to Brooklyn and Jay-Z proclaimed, “The city is under new management.” What are your thoughts on the rivalry between the two New York teams?

HC: You know, I was talking to Bill the other day and told him, “I miss the days when this rivalry used to mean something.” I believe it got off to a fast start that first year or two with the whole “Brook-lyn” thing and even that Garnett-Bargnani altercation but the rivalry has died down recently as both teams have struggled. The real New York team should dominate the other this year but you just never know. Either way, I’ll be tuned in rooting for the Knickerbockers.

DT: The rivalry is absolutely terrible. I agree with Hillary that it started off well but we need something that will light a flame under these guys, okay? We need to build a wall around Madison Square Garden and make the Brooklyn Nets pay for it. The wall is going to be huuuge. We won’t even let them in when they’re scheduled to play here because they’d lose anyway folks.

Moderator: On to our last question, we’ll go to Twitter where user @KnicksMemes sent in a question regarding Carmelo Anthony:

. @RealDonaldTrump @HillaryClinton what will you do to ensure Carmelo gets fair treatment from referees?

HC: I believe there needs to be a better understanding between referees and players in general. Many players also believe they receive unfair treatment from referees so this is something we’d investigate. I have to admit that I have seen some questionable no-calls when Carmelo drives to the basket but it’s a league-wide problem for superstars.

DT: I’m glad you asked. Back in 1998, I purchased real estate three blocks east of Madison Square Garden on 5th Ave. and turned it into a beautiful building. It’s now the building I make the most revenue out of. That’s what I’m going to do for the New York Knicks. I am going to take Melo’s reputation with the referees and turn it into LeBron’s reputation. Sooner rather than later, nobody will be allowed to breathe on Anthony. It’s time to make New York City great again and it starts with Carmelo Anthony, believe me.

Moderator: Will both of you accept the outcome of the 2016-2017 New York Knicks season as the will of the basketball gods?

HC: I support the basketball gods’ judgement and will certainly support the outcome of this Knicks season.

DT: I want to make the New York Knicks great again. If they do not become great again this season, I would hesitantly accept the outcome.

Moderator: Thanks to both candidates for participating in this debate. To all of our viewers, be sure to follow @SteveTsakSS on Twitter for everything New York Knicks basketball. Good night everyone.