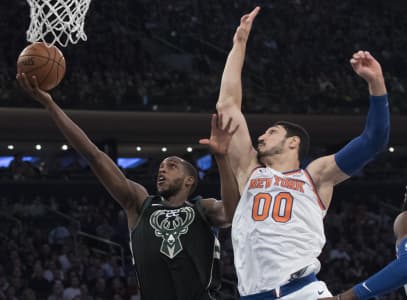 The New York Knicks are seeing their playoff chances slowly slip away as we get closer to the All-star break. The team was relatively quiet at the trade deadline, so they will need to vastly improve their play over the final few months of the season in order to get back into playoff contention. The Knicks had a chance to get a much-needed win when they went on the road to play the Indiana Pacers on Sunday, February 11, but fell short for the sixth straight game.

New York started off extremely strong against the Pacers. They used a balanced offensive attack to consistently hit easy shots. The hot shooting put the Knicks up 37-36 after the first quarter. The lack of consistent effort of defense kept New York from getting out to a huge lead, and the poor defense continued in the second quarter. The offense also suddenly went cold, so the Knicks were facing a six-point deficit at halftime despite the hot start.

The Knicks stepped up their defensive pressure in the second half, but they were still unable to shrink Indiana’s lead. The Pacers were able to grow their lead to 10 points by the end of the third quarter after only scoring 26 points in the quarter. New York just could not find a way to regain the hot shooting touch they displayed early in the game. After both teams played a relatively even fourth quarter, the Knicks left Bankers Life Fieldhouse with a 121-113 loss.

The Knicks will win most nights when they score 113 points, but they simply had no way to stop Victor Oladipo. Indiana’s star shooting guard scored 30 points, and he only came one assist and two rebounds short of a triple-double. Michael Beasley performed great in his new starting role for New York, but the Knicks do not have the depth to complete against the best teams in the league without Kristaps Porzingis.

The New York Knicks are now seven games behind the Philadelphia 76ers for the eighth playoff spot in the Eastern Conference. New York will get a chance to gain a game on the 76ers when they travel to Philadelphia on Monday, February 12. A loss on Monday will be absolutely devestation for New York’s slim playoff hopes because it will put them eight games back with only 24 games left in the season.