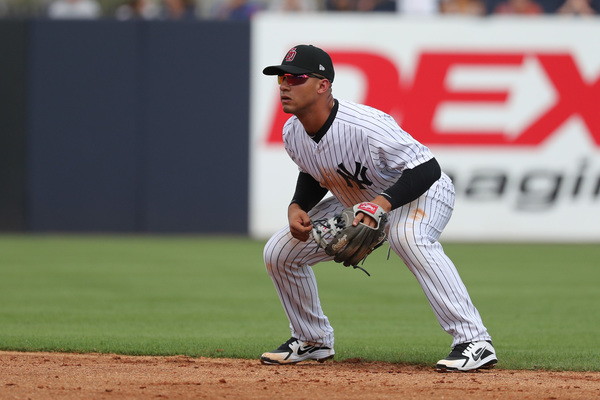 THROUGH THE RANKS
As a 16-year old kid from Venezuela, Gleyber Torres was already a highly-touted baseball prospect. The Chicago Cubs organization took a chance on this young stud and signed him as an undrafted free agent back in 2013. Torres was very successful as a teenage player within the minor league ranks and was being noticed by other organizations looking for potential stars. One organization that certainly noticed was the Yankees. Torres was brought over in a trade in 2016 as part of the deal that signed Aroldis Chapman, back in the summer of 2016. Fast forward two years and Gleyber Torres is making his major league debut with America’s most famous and beloved team, the Yankees.

YANKEES STRUGGLING
The Yankees are hoping Gleyber Torres can solve some of their major issues on the field. The New York Yankees are off to a less than spectacular 11-9 start and are looking to make a positive change in the lineup before the season gets away from them. The Bronx Bombers came into the season with huge expectations after acquiring someone such as Giancarlo Stanton. Stanton has been struggling, but he is not the only Yankee with a rough start to the season. Brandon Duray has not played in a game in over two weeks due to migraine issues. And the second base prospect, Tyler Wade, who was brought up at the beginning of the year, has only 3 hits in 35 at-bats. The Yankees have not looked impressive in the field, having committed the most errors of any team so far this year. Torres has been a solid infielder for several years and looks to establish the Yankees as a competent defensive team. The Yankees have not started the season well, but they are certainly built for the future.

TORRES’ SUCCESS
Gleyber Torres has been biding his time in the minor leagues for almost 5 years. Thankfully for this organization, Torres is only 21 years young and his best playing years are still ahead of him. Torres was brought up from the Triple-A Scranton/Wilkes-Barre affiliate where he was hitting .347 with 11 RBIs in only 14 games played. With a Yankees lineup filled with young stars, Torres will only add to that. Torres, unfortunately, managed to go 0-4 in his major league debut as the Yankees beat the Toronto Blue Jays 5-1 Sunday afternoon.