Home NFL Giants Davis Webb: Is he the Future of the Giants? 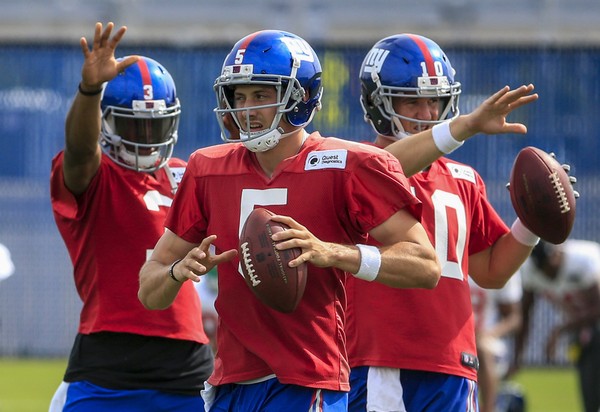 Eli Manning has been a solid quarterback for the New York Giants for nearly two decades. During his career, he won two championships for the team. As he enters the final stages of his career, the Giants must make a significant decision. How does the team replace Eli Manning?

Davis Webb is the current backup quarterback on the roster. Although Webb has some game experience, he is not as talented or experienced as Manning. The Giants surprised many people by passing on a quarterback in the latest draft.

Is Webb the Answer?

Davis Webb started several games last year for the Giants. The coaching staff wanted to see how he would perform as the starter. He struggled in each of his starts. However, the entire team struggled for the entire season. Some fans think it is unfair to judge Webb based off of a few games.

If the Giants believe that Davis Webb is the quarterback of the future, he needs to receive more playing time this year. Most people think that Manning will retire within the next few seasons. The team needs to be prepared with a quarterback who can step in and contribute to the team.

If the coaching staff is not confident in Webb, the team should draft a quarterback in the upcoming draft. However, drafting a quarterback is never an exact science. It is a significant risk to rely on a rookie quarterback.

The Giants could target an experienced quarterback in free agency to fill the gap. The problem with this option is that free agent quarterbacks are commanding huge contracts from teams. Kirk Cousins signed a historic deal with the Vikings after the 2017 season. The Giants do not have the salary cap space to sign a talented free agent quarterback. The team would have to cut several players to make this move a reality.