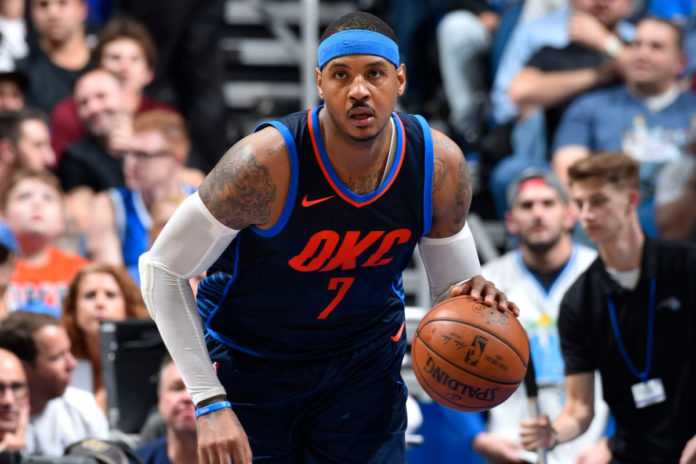 Carmelo Anthony came into the NBA as one of the most hyped up prospects of his generation. of course, it didn’t hurt that he came in as part of the most historic NBA draft class of all time which included LeBron James and Dwyane Wade. Melo started his career by playing in Denver for eight years before being dealt to New York. Despite starting his career in Denver, Carmelo would establish himself as an icon in New York. Despite his strong play over the past seven years, Anthony left New York with a legacy that didn’t showcase his talents and didn’t showcase what he could have been. This past week Melo came back to Madison Square Garden for the first time since heading to Oklahoma City and the results were mixed, much like his time spent in New York.

When Carmelo Anthony’s name was announced in the starting lineup for OKC, the emotions on Melo’s face were palpable. The emotions in the stands were equally conflicted as there was applause and even a smattering of muted boos. Melos introduction was preceded by a tribute video on the big screen that showed some of the biggest plays in Anthony’s New York career, a career that spanned almost seven seasons. Anthony said of the tribute, ” That was big-time, and for me that goes a long way.”

The way that Carmelo’s career ended in New York was as much of an indictment of the New York management as it was of Melo as a player. Melo and former team GM Phil Jackson did not get along in a very public way. Despite Melo’s reluctance to engage in the public feud, Phil Jackson made it all but impossible to ignore by making multiple public and pointed remarks. Melo would end up being dealt to Oklahoma City in exchange for Doug McDermott and Enes Kanter and that would end the rocky relationship hat was, at times, something special.

Anthony wasn’t quite in the post-game presser despite the Thunder losing to New York. Melo said, “It’s deeper than basketball when it comes to me and this city.” Carmelo’s career in New York certainly didn’t play out how he had hoped, but there were still good times. Now, Anthony needs to find a way to elevate his time with OKC as superstar Russel Westbrook and Paul George aim to help get Melo to the playoffs.