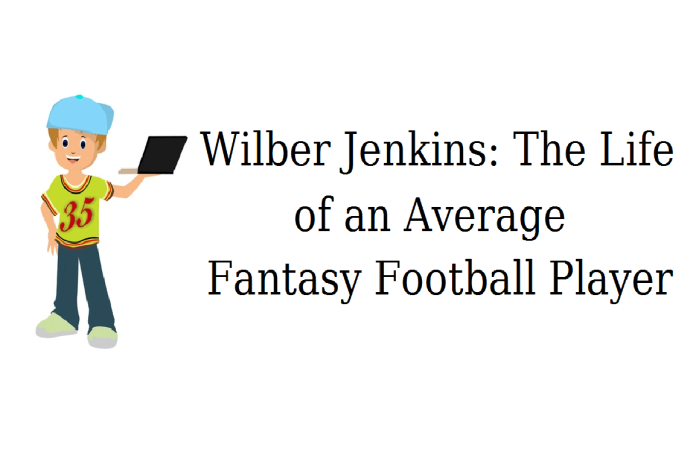 Every year, little Wilber Jenkins gets ready for the NFL and fantasy football season as excited as ever. This year he knows for sure who to target and his confidence is sky high. He’s been researching and checking stats all offseason. In reality, little Wilber is a lost soul playing a dangerous game.

Fantasy Football can be the most fun game ever, or a source of weekly depression. Those emotionally invested with their fantasy teams consistently have their happiness enhanced or reduced to disappointment based off of something they cannot fully control. Some leagues have high-money pools awarded to the winner of their league. Fantasy Football is the ultimate paradox; a fantasy form of football that has altered the reality of football. There is always going to be the fantasy masters, and the bottom-feeders. Now picture little Wilber Jenkins in the middle, just an average fantasy football participant. We will take a look at the ups and downs you are almost guaranteed to face in fantasy through the eyes of the most average man in the world, Wilber Jenkins.

The injury bug can be annoying for particular weeks, or completely derail a season. The best team in Week 1 will look a lot different by Week 10 the majority of the times. Most of the time the best team won’t even win the league, the healthiest team will. Now as a player it is your responsibility to rehab and get back on the field. As a fantasy owner it’s your job to try to be humane and realize these people are human beings and fantasy football is a game. Although no one should ever cheer injuries, they can also be beneficial in the long run for your team. Wilber shows us how this is possible.

Imagine our man Wilber owned Jamaal Charles this year. Through 4 ½ games Wilber’s top pick is dominating the stat sheet. One bad cut later and Wilber’s happiness immediately turns to despair. There is no way to replace the production of his star player, and he feels all hope is lost. Without a strong back half of his draft, that one cut could be the difference between first and last place for Wilber.

Now let’s say Wilber had Devonta Freeman on his bench.  In Week 2, Atlanta’s presumed starter Tevin Coleman breaks his ribs. In his absence, Freeman decides to go absolutely silly scoring at will in all leagues. You can easily argue this emergence wouldn’t have happened without Coleman’s injury.

Although it is out of an owner’s control, the most important asset in Fantasy Football is the same as real football. Health.

Let’s say that a reporter hints at a certain guy getting more opportunities in a certain week. Wilber believes the report and inserts that sleeper into his lineup.  If that report comes to fruition, Wilber is going to be smiling on Monday morning at school.

Now let’s say that Wilber owns John Brown. In Week 8, all reports all week say that Brown is limited in practice, but expects to be fine. His Coach, Bruce Arians makes a public statement that Brown is fine in order to not show his hand. Wilber sees that Brown is active and confidently inserts Brown into his lineup. John Brown then proceeds to sit on the sideline and never get onto the field. This is the difference between reality and fantasy. Wilber is angry at Brown, Arians, and fantasy in general. Arians couldn’t care less as his Cardinals got the win. It is important to remember that no one except Wilber cares if Wilber wins fantasy football and that you must be able to value sources based on your own experiences and understanding.

Let’s say that you have your best running back going against one of the worst run defenses in the league. All the major fantasy outlets all agree that this player is going to have a great game. You’re obviously not going to bench that guy. However, the reality is you really never know. Sometimes the injury bug or the game plan doesn’t even matter. Players are inclined to bad games.

Now let’s say it’s Week 2 of the 2015 season. Wilber is facing Jeremy Hill going against the Chargers weak run defense. He is penciling in a big day for Hill, especially coming off of a 2 touchdown game in Week 1.  Hill goes on that game to lay an egg, fumbling twice, and not eclipsing 40 yards rushing. Wilber watches with the biggest smile as Hill hands him a win for the week. This is the happy side of underachievement in fantasy.

The harsher reality is when the underachiever plays for Wilber’s team. Let’s say our friend Wilber is an owner of Adrian Peterson. After 3 double digit games and fresh off a bye week, Wilber doesn’t think twice about AP facing the Chiefs. Peterson gets 26 carries deleting the worry about game plan. He also avoids injury. Wilber would have to love his chances for a big day from AP. However, he gets Peterson’s worst outing of the season. There is no legitimate explanation except for why it happens. Nothing is guaranteed in the NFL. This makes real football great, and fantasy football stressful.

The goal of analyzing Wilber Jenkins’ season is to understand that you cannot ever be too down or up as a fantasy owner. Matchups are not inevitable. Health is not inevitable. The amount of opportunities your player touches the ball is not inevitable. So I digress with the message I always tell my colleagues, friends, and family that face these ups and downs. Fantasy football is a game. It is supposed to be fun. It is supposed to be difficult. It is a marathon, not a sprint. It sounds cliché but it really can save you a few miserable Monday mornings. We all can put ourselves in little Wilber Jenkins’ shoes and when it’s all over, hopefully we can look back and reflect on the fun experienced, instead of the pain felt. Find your inner Wilber Jenkins.

Want to talk Fantasy Football with me? Tweet me at @SSAJMilackSport with questions and comments!